Leah Angelo is an international contemporary abstract artist originally from Vienna, Austria who has exhibited in Europe, North America SE-Asia and Australia. Her abstract works have been highly sought after by private collectors ranging from Emmy winners in Hollywood to corporate art collectors throughout the world. Her art has also gained her a highly notable Cultural Promotion Award in Austria along with commissioned works by the Austrian Federal Ministry of Science, Research and Art.

The acclaimed painter Friedensreich Hundertwasser first discovered Leah Angelo’s talent by accident and this played a significant influential role in Leah Angelo’s early artistic development. Privileged to attend Hundertwasser´s master class at the Academy of Fine Arts Vienna (today: University of Applied Arts Vienna) as a student, Leah Angelo was able to reach a new understanding of organic shapes, their imminent unpredictability and free-flowing appearance.  The close examination and discussions relating to organic forms and their multitude of manifestations in art and nature also laid the foundation of Leah Angelo’s characteristic style and philosophy. Today the artist coherently uses the phenomenon of transparency, fluctuation and modulation (in reference to form and color) and consciously allows room for imminent movement of all artistic media applied in order to create a somewhat subliminal but truly genuine effect of colored undulation in her work.

1997 Leah Angelo emigrated to the USA (later Canada) where she lived and painted for almost two decades. North America offered vital opportunities such as new exhibitions as well as her acquaintance with Mike Kelley and Robert Rauschenberg – from 1998 onward, both figures had been a significant influence for her later period as a visual artist.

“Leah Angelo possesses a unique ability to sense, interconnect, and communicate diverse realms of existence through her art. Her abstractions are inspired by wonders of nature as well as by dreams and multidimensional levels of awareness. The resulting compositions embody harmonious confluences of mind, body, and spirit, representations of universal love and reverence for all, and of the divine essence that exist both within and around us.”

“What sets me apart from others is my special skill to create a harmonious, seemingly naturalistic image by using a purely abstract technique which exclusively follows irrepressible principles.
Over all the years l created and perfected my very own technique which became my signature giving my paintings (acrylics on canvas) the unique effect of ethereal translucent glazes and of multi-dimensionality.
My exclusive abstract paintings instead are an ethereal expression of how I see the world at a non-ordinary level of perception.” 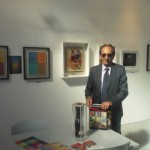 “Chromatism that dazzles the vision. In the works: “Movement” and “Sea life”, Leah has achieved the right balance, the synthesis of expression, this I believe is only possible with great application and study, especially with love for the art”

“Leah Angelo´s ethereal body of work often speaks a gleaming and universal language that understands to transmit harmony and a sense of inner peace aiming for equilibrium… which accomplishes to cross cultural borders at ease,… which also seems to overcome our world of polarity that we usually call “sine qua non”.
Leah Angelo´s work undeniably is an artistic highlight in the increasingly diverse and international nature of the evolving art community in our time!”

… Leah Angelo distinctly and visibly steers Modern Contemporary Art into new territory when she allows her expertise as a hypnotherapist to influence the meticulous creation of translucent landscapes and phantasmagorical, chromatic journeys that irresistibly lead us spectators to inner reflections and to the incredible discovery of our hidden Soul! – a smooth, comfortable but utmost invaluable experience!
Stating the obvious at last: An incredibly brave venture and brilliant sleigh of hand, full of revelation, personal insight and unforgettable bliss! – my personal thanks to the artist Leah Angelo!